The function of the intrinsic cervical flexors is to produce forward sagittal plan rotation or ‘rolling’ of the cervical vertebrae.  The muscles producing the sagittal rotation motion in the upper cervical region are the rectus capitis anterior and rectus capitis lateralis.

The function of the extrinsic cervical flexors is to add force to the flexion movement and produce flexion motion associated with forward translation of the cervical vertebrae.  The muscles contributing to the forward translator motion in the cervical region are the sternocleidomastoids and the anterior and medial scalenes.  Commonly, these muscles are dominant during flexion movements.  The dominant effect of the extrinsic muscles can result in a faulty movement pattern of anterior translation of the head and cervical spine with diminished anterior sagittal plane rotation.

The function of the intrinsic cervical extensors is to produce sagittal rotation or backward ‘rolling’ of the cervical vertebrae.  The muscles attributed to producing the posterior sagittal rotation in the upper cervical region are the rectus capitis posterior major and minor, the oblique capitis inferior and superior, and the semispinalis capitis,the spelnius capitis, and the longissimus capitis. 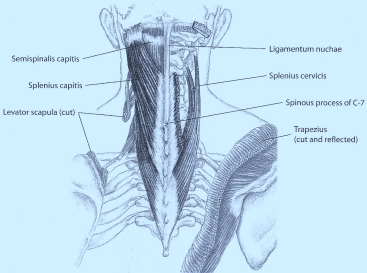 The muscles in the lower cervical region that produce posterior sagittal rotation are the semispinalis cervicis, the splenius cervicis, and the longissimus cervicis.

The extrinsic cervical rotators include the sternocleidomastoids, the scalenes, the upper trapezii, and the levator scapulae.  These muscles all have the action of rotation but also the simultaneous action of   lateral flexion.  If these muscle groups are dominant during rotation, the precision of movement about a vertical axis may be compromised.

The therapist may also observe rotation with simultaneous extension.  This faulty movement pattern may be an indication of dominance of the sternocleidomastoid and its influence as an extensor of the upper cervical spine over the poorly recruited intrinsic cervical rotators which would maintain motion about a vertical axis.  The actions of the upper trapezius and levator scapulae can also contribute to cervical extension during rotation.

In addition, the therapist may observe cervical rotation with simultaneous flexion and/or forward translation of the head and neck.  This faulty movement pattern may be an indication of dominance of the anterior scalenes, the middle scalenes, and the sternocleidomastoids during the movement of rotation.

Manually guiding the patient’s pattern of rotation is often necessary.  A frequent intervention is to instruct the patient to turn the head and neck easily to reduce the magnitude of muscular contractions and encourage a more appropriate muscle recruitment pattern.  Strong muscle contractions, especially of the extrinsic rotators can add compression to the cervical spine structures.

In addition, the ‘extrinsic’ upper trapezius and levator scapulae are attached from the cervical spine region directly to the scapula and clavicle.  The clinical significance is that single arm movements can result in compensatory motion of rotation of a cervical spine segment or several segments.  Even the passive stretch of the trapezius and levator scapula (arms hanging at your side) will influence the ROM during active cervical motions, especially rotation, which can result in pain.