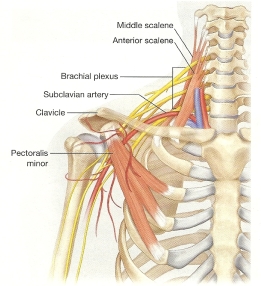 Thoracic Outlet can include several variations of nerve or vascular compression near the base of the neck and upper rib cage.  Compression at the superior thoracic outlet is common and the most understood portion involves compression of the neurovascular bundle passing between the anterior and middle scalenes, also known as Anterior Scalene Syndrome.  This part compresses the brachial plexus of nerves and brachial artery.  Because the subclavian vein does not pass between the scalene muscles, there are usually only nerve compression symptoms present such as pain, tingling, and numbness in the arms and hands.

Tight contracted pectoralis major and pectoralis minor, subclavius, and subscapularis muscles can create forward shoulder posture, also known as Anterior Shoulder Rotation.  When these muscles, along with the scalenes and sternocleidomastoid (SCM), are contracted they can compress the brachial plexus of nerves causing the most common form of thoracic outlet syndrome.  The most common symptoms are numbness, tingling, and pain down the arm.

After you balance the muscles in the shoulder and cervical areas, thoracic outlet syndrome can be relieved.  More detailed work on releasing the SCM and scalenes and techniques for resolving cervical bony fixations that compress nerves higher up , are addressed in chapter 6 (cervical conditions) of Waslaski (2012).  Clinical Massage Therapy: A Structural Approach to Pain Management.

Before you begin the scalene or sternocleidomastoid stretch you must have the client perform the following precautionary test.  This is called the vertebral artery compression test: