Excerpted from Page, Frank, and Lardner. Assessment and Treatment of Muscle Imbalance: The Janda Approach (2010)

Muscular chains are groups of muscles that work together or influence each other through movement patterns.  There are three types of muscular chains:  synergists, muscle slings, and myofascial chains.  Remember, each type of muscular chain is interdependant on both the articular and neurological systems.

Synergists are muscles that work together with other muscles (agonists) to produce movement or stabilization around a joint.  For example, in shoulder movement the rotator cuff is active in keeping the head of the humerus centered in the glenoid, while at the same time the rhomboid, serratus anterior and trapezius work as stabilizers of the scapula to provide a stable origin for the rotator cuff muscles.

So, synergists work together for isolated joint motion.  These muscular chains are also engaged in force coupling.  Force couples are two equal and opposite muscle forces that produce ‘pure rotation’ around a center of motion.  A good example would be how the rotator cuff and deltoid provide a force couple for shoulder abduction.  Clinicians must evaluate force coupling within a muscular chain for movement dysfunction.  In the example given, the rotator cuff should hold the head of the humerus in the center of the glenoid by exerting a downward tension while the deltoid creates an upward tension.  When they are balanced, the shoulder can move through pain-free abduction.  A typical imbalance occurs when the deltoid overpowers the rotator cuff and the head of the humerus is pulled up against the underside of the acromiom.  If the subacromial space, which is maintained by force couple balance disappears, impingement and pain can result.

While synergists work together locally for isolated joint movement…

Muscle slings act globally, providing movement and stabilization across multiple joints.  Muscle slings have been recognized in European anatomy and medicine since the 1930s.  Thomas Meyers, in his famous work Anatomy Trains (2001), provides the description of how chains of muscles that are linked together, often in loops, influence the quality of global (entire) movement patterns.

Muscle slings are believed to facilitate rotation and transfer forces through the trunk, from the lower to upper body, in particular.  Slings provide both stabilization and motion in reciprocal and contralateral movements such as gait.  Muscle slings interconnect by attaching to common ‘keystone structures’.  Keystone structures include the humerus, ribs, linea alba, femur, and tibia, in addition to the pelvis and scapulae, described previously.

While Meyers based his chains on fascial connections throughout the body, the Europeans, Vladimir Janda in particular, recognized both fascial and functional factors in muscular chains.

Extremity slings are designed for simultaneous compound movements of the limbs. 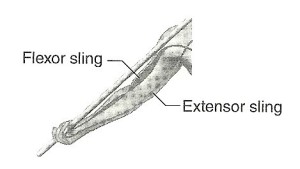 The trunk muscle slings facilitate reciprocal gait patterns between the upper and lower extremity as well as for trunk stabilization.  The three slings that have been identified are the anterior, spiral and posterior slings. 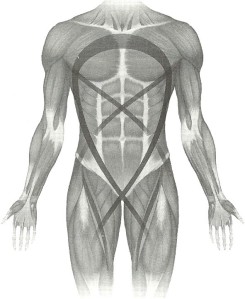 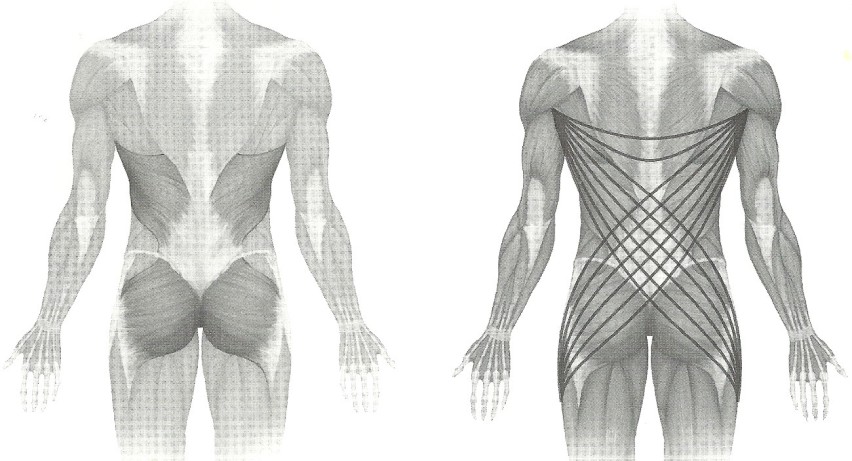 Understanding the function and pathsof these slings is necessary for clinicians to correctly diagnose and treat challenging musculoskeletal pain syndromes.  For example right shoulder pain may be related to left hip dysfunction, and vice versa…and may present clinically as pain, muscle imbalances, or trigger points within the sling.

Fascia serves as the vital link to multiple muscles acting together for movement, as well as connecting the extremities through the trunk.  An example would be how the thoracolumbar fascia links the lower extremity (gluteus maximus) and the contralateral upper extremity (latissimus dorsi) transferring load across the midline to control limb extension and trunk rotation.  These facial layers help connect muscle throughout the region, creating myofascial chains.

The anterior fibers envelop the psoas and quadratus lumborum (QL).

The middle layer is continuous with the TrA, and attaches to the obliques and latissimus.

The posterior, possibly the most important layer, is designed to transmit forces between the shoulder girdle, lumbar spine, pelvis, and lower extremity.

It would be an understatement to suggest that clinicians could evaluate and treat chain reactions without a considerable understanding of the role fascia plays in both structure and function.

For a more complete and detailed understanding of myofascial chains, Thomas Meyers’ Anatomy Trains is indispensable.